The Royal Botanic Gardens at Peradeniya was established in 1821, six years after the final occupation of the Kandyan Kingdom by the English. The site is less than 5.5 Km from Kandy on the Colombo Road, and occupies a loop of the river Mahaweli, which surrounds it on all sides except the south, where it is bounded by the main road. The area 61.25 ha in extent, is about 1550ft from sea level. More than 4000 species of plants including woody trees, Palms, Ferns, Orchids and shrubs currently present within the gardens. 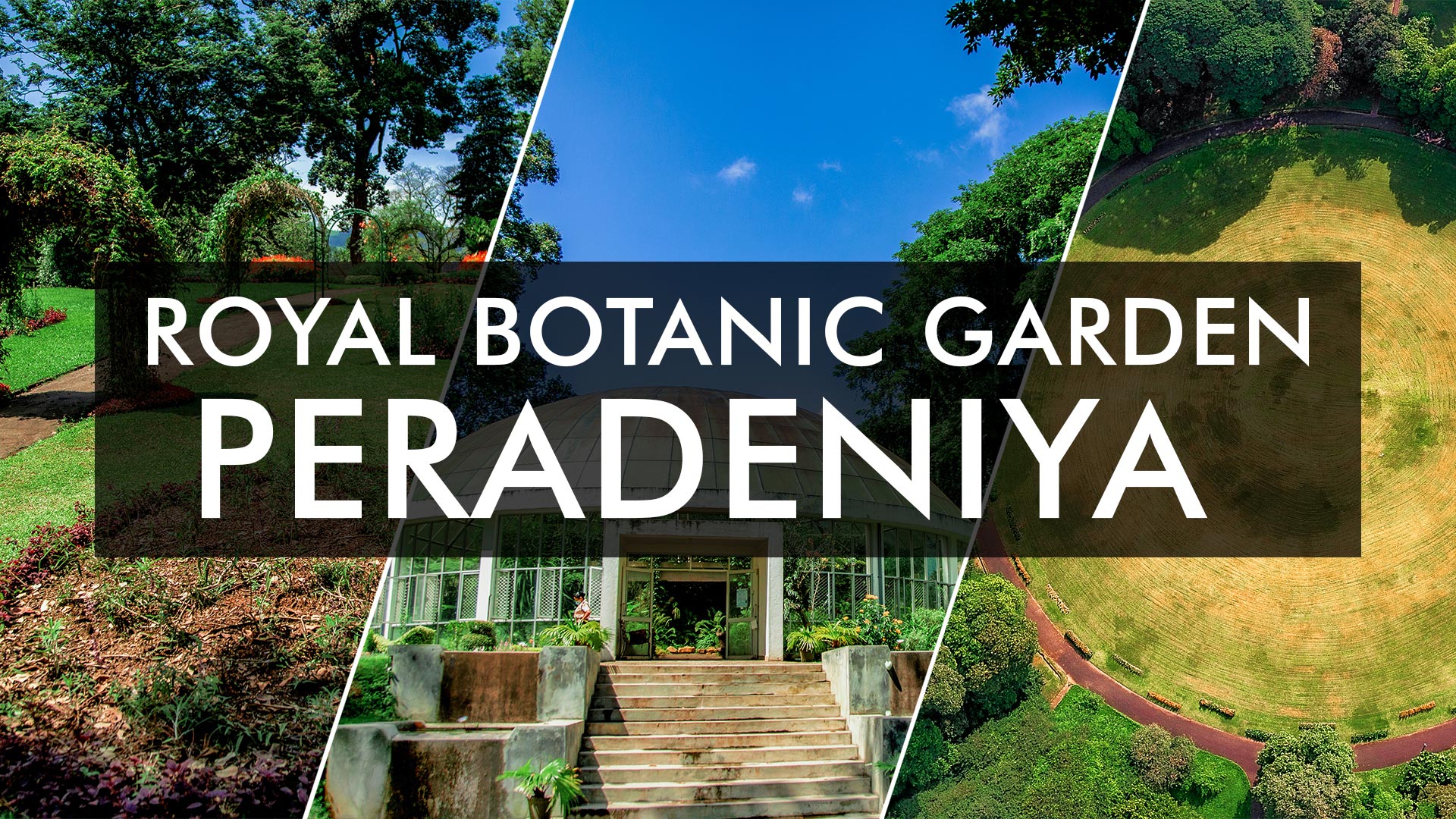 Placement of the garden

Royal Botanic Gardens, Peradeniya are about 5.5 km to the west of the city of Kandy in the Central Province of Sri Lanka. In 2016, the garden was visited by 1.2 million locals and 400,000 foreign visitors.It is near the Mahaweli River (The longest river in Sri Lanka). It is renowned for its collection of orchids. The garden includes more than 4000 species of plants, including orchids, spices, medicinal plants and palm trees. Attached to it is the "National Herbarium of Sri Lanka".

The total area of the botanical garden is 147 acres (0.59 km2), at 460 meters above sea level, and with a 200-day annual rainfall. It is managed by the Division of National Botanic Gardens of the Department of Agriculture.

The history of the Royal Botanic Gardens dates as far back as 1371 when King Wickramabahu iii ascended the throne and kept court at Peradeniya near Mahaweli Ganga. Later, in the reign of King Kirti Sri from 1747 to 1780 this was made a Royal Garden and from 1780— 1798 King Rajadhi Rajasirighe resided therein, where a temporary residence was erected for him.

A vihare and dagoba were built in the reign of King Wimala Dharma which was improved by King Rajadhi Rajasinghe. The vihare and dagoba were destroyed by the English when they occupied Kandy. The famous historical battle of Gannoruwa between Rajasinghe ii and the Portuguese was fought on the Northern side of the river. A priest resided here till the Gardens were formed by Mr. Alexandar Moon in 1821 six years after the final conquest of the Kandyan Kingdom.

In 1810 under the advice of Sir Joseph Banks a garden named Kew was opened in Slave island and Mr. William Kerr was appointed as its Superintendent. In 1813 the garden was moved to Kalutara for the reception of economic plants which could be cultivated there on a larger scale than was possible at Slave Island. Kerr died in 1814 and under the rule of his successor Mr. Alexander Moon this Garden was finally moved to Peradeniya in 1821 as it was found to be favourable and better adapted for the proposed Botanic establishment. The transfer of exotics from the Kalutara Garden was made by successive Superintendents at least up to 1843.

During Moon’s superintendence the opening of the Royal Botanic Gardens, Peradeniya, can be said to have commenced though at first only the South West portion of the Gardens was cleared and opened and it was mostly planted with cinnamon and coffee. Moon published his

Catalogue of Ceylon Plants” in 1824 in which was given the Botanical and native names of 1,127 plants, indigenous to the island. After the appointment of Mr. George Gardner in 1844 the institution started upon its more active independent and useful existence that it has since maintained. Only 40 acres of the 147 acres were in cultivation when Gardner took charge and the chief use made of the land was to grow jak, coconuts and vegetables for sale by the Government Agent in Kandy. Gardner effected many important improvements in the condition of the Gardens but his chief work was the exploration of the country for the collection and preparation of its flora. He died at Nuwara Eliya in 1849 and was succeeded by Dr. Thwaites who for over 30 years maintained the Gardens in a high state of efficiency, added largely to our knowledge of the flora of the Colony and gave the establishment its world-wide reputation. Botanic Gardens at Hakgala was established in 1861 for introduction of Cinchona into the island and in 1876 Gampaha (Henarathgoda) botanic garden was started for the introduction of Rubber. Thwaites was succeeded by Dr. Henry Trimen, under whose rule and capable management the beauty and usefulness of the Gardens were very considerably advanced. He established the Museum of Economic Botany, opened branch Gardens at Badulla and Anuradhapura and began the publication of his work, “The Flora of Ceylon” which however was finished by Sir Joseph D. Hooker after Trimen’s death in 1896. In 1896 Trimen was succeeded by Dr. J.C. Willis and from that date a new extension of scientific work took place. In the early years work was mainly directed towards the introduction and acclimatization of useful and ornamental plants but in later years activities developed towards Economic botany and Agriculture and led

to the development of the Department of Agriculture in 1912. Mr. HF, Macmillan who was appointed Curator in 1895, was made the Superintendent of Botanic Gardens in 1912 and Mr. T.H. Parsons the Curator in 1914. During Macmillan’s superintendence the Gardens were improved and extended and his great work “A Hand Book of Tropical Planting and Gardening” was published. Macmillan retired in 1925 and Mr. T.H. Parsons continued as Curator till 1945. Mr. D.M.A. Jayaweera who was appointed as the Superintendent in 1945 contributed a lot to our knowledge on medicinal plants and orchids of Sri Lanka. Mr. D.T. Ekanayake who became the Superintendent in 1971 pioneered the floriculture in Sri Lanka. Mr. D.B. Sumithraarachchi, as the director National Botanic Gardens improved the condition of the botanic gardens tremendously and conducted many useful taxonomic work until leaving the gardens in 1998. Work on the establishment of a new botanic gardens at Mirijjawila (near Hambantota) was started in 2006 and that is the first botanic gardens initiated after independence. That 300-acre garden will be the largest in Sri Lanka specializing on the conservation of dry and arid zone plants. Another Botanic garden was initiated at llukowita, Avissawella for the ex-situ conservation of wet zone flora. Plans are underway to establish 5 more botanic gardens before 2016.

Today, the Botanic Gardens are responsible for the management and development of Botanic Gardens, National Herbarium, Medicinal Plant Gardens, Gardens attached to the Official residences and Offices of His Excellency the President, The Hon. Prime Minister, Commonwealth War Cemeteries, the Sacred Bo Tree at Anuradhapura and other Historic Trees of Sri Lanka.

The objectives of Royal Botanic Gardens:

Royal Botanic Gardens at a glance

How to see the garden

A map showing the most important places is enclosed in this folder. 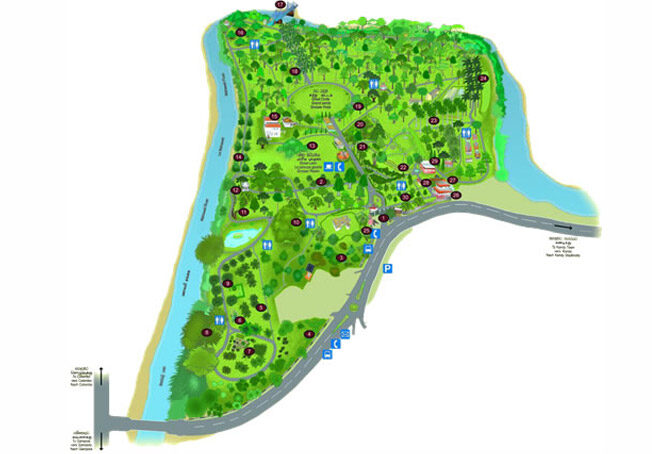 What you can see

visitors are advised to walk round the gardens if they wish to explore the many beautiful places in this very compact garden.

Orchid House & Gardens of Royal Botanic Gardens Peradeniya.
The Orchid House offers the visitor a captivating display of exotic blooms of Cattleya, Dendrobium, Arachnis, Oncidium, Phalaenopsis, Vanda and their hybrids. Around the Orchid House may be seen several hardy tropical orchids including the largest orchid in the world. (Grammatophyllum speciosum) which produces flower spikes up to 2.5 m long and the Green Orchid (Coelogyne meyeriana).
Fernery
Adjoining the Flower Garden is the Fernery. It is beautifully landscaped with intersecting paths and is well shaded by lofty trees draped with climbing vines and creepers. The fern collection includes about 100 indigenous and exotic species.
Great Lawn
Close to Monument Road is the Great Lawn. The most unique feature here is the Java Willow or Java Fig Tree (Ficus benjamina) which occupies the centre of the lawn like a giant living umbrella.
The Lake
The Lake is situated in South Drive to the left of the Main Entrance. The margin of the Lake is planted with marsh plants. The most noteworthy is the Papyrus of the Nile (Cyperus papyrus) The centre of the lake is covered with different (Nymphaea) plants.
Spice Garden
The shady Spice Garden situated on the right of the Main Entrance has a representative selection including cinnamon – the main spice exported from this country, pepper – the most demanded spice in the world, cardamom and nutmeg. Some of the oldest nutmeg trees planted in 1840 are still in full bearing. In addition there are bay leaf (Pimenta racemosa) and allspice (Pimenta dioica) trees.
Double Coconut Palms
There are over 200 species of palms in the Gardens. The most remarkable amongst these is the Double Coconut (Lodoicea maldivica) from the Seychelles. This palm produces the largest seed in the plant kingdom -The fruits take five years to mature. These palms may be seen flanking Monument Road, which branches off to the left from the Main Central Drive, about 100 m from the Main Entrance.
Flower Garden
The Flower Garden, near the Orchid House, is laid out with beds of flowering annuals and perennials. The Most striking feature here is the ribbon border of showy coleus varieties traversed by a path which leads into an octagonal conservatory. Here you may find a collection of shade-loving plants. There are three magnificent palm avenues, viz., the graceful Cabbage Palm Avenue (Roystonia oleracea) flank-in the River Drive – the palms in this avenue are over 21 m in height; the Palmyrah Palm Avenue (Borassus flabellifer) which joins the Flower Garden with River Drive and the Royal Palm Avenue along the Main Central Drive (Roystonia regia)
Plant House & Cacti
Near the Orchid House is a small Plant House containing a variety of green house plants e.g., Ferns, Begonias, African violets, Episcia, Dieffenbachia, Calathea, Philodendron, Bromelia and Anthurium. A collection of cacti xerophytic plants – over 800 specimens- is exhibited in the nearby Cactus House. They include aloes, agaves, Opuntia, Cereus, Rebutia, Rhipsalis, etc.
Bamboo Collection
The bamboo collection is along River Drive to the right of the Lake. The giant bamboo of Burma (Dendrocalamus giganteus) is the largest known in the world. The stems attain a height of 30-40m and up to 20-25 cm in diameter. The average growth rate of new shoots is about 30cm a day. Others are the yellow building bamboo (Bambusa vulgaris), the feather – leaved bamboo (Dendrocalamus membranaceus), the prickly bamboo (Bambusa spinosa) and the Dwarf Chinese bamboo.
Flowering Trees & the Arboretum
The most spectacular of the Gardens are the flowering trees which come into bloom at various times with peak blooming during the first half of the year. Amherstia nobilis popularly known as the Pride of Burma is the finest and a row of this is found planted at the Main Entrance. An extensive Arboretum 20 ha in extent contains approximately 10,000 trees. Some of these trees are magnificent specimens which are over 100 years old. Among them are many tropical timber trees such as satinwood and mahogany.

Come and explore the spectacular plant life of Sri Lanka